Spouses team up to promote kindness, giving back 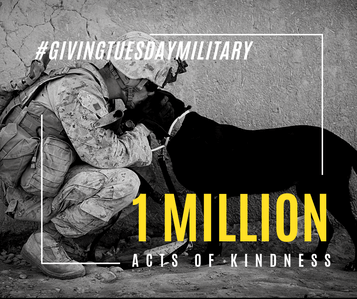 After you score holiday deals during Black Friday, Small Business Saturday and Cyber Monday, four military spouses are asking you for one more thing: Contribute to Giving Tuesday Military, but it doesn’t have to cost you a penny.

You may have heard of Giving Tuesday — a philanthropic movement started in 2012, encouraging charitable donations at the start of the holiday season.

You may be thinking, “I thought this wasn’t going to cost me anything?”

It doesn’t have to.

Giving Tuesday Military is heading into its second year, and it is all about contributing kindness.

“We didn’t want this to be about money. People can contribute through acts of service through kindness. This is about putting others above yourself,” Army spouse Maria Reed said.

Giving Tuesday Military started in 2019 when an Army spouse, a Coast Guard spouse and a National Guard spouse, all being recognized for their contributions to the military community, met in Washington, D.C.

“Jessica Manfre, Samantha Gomolka and I met through the Armed Forces Insurance Military Spouse of the Year program. When we met, we just connected and knew we wanted to do something impactful together. We were from different backgrounds, and lived in different parts of the country, but shared one common purpose — to make a difference,” Reed said.

The trio reached out to the Giving Tuesday organization and pitched getting involved by organizing and encouraging acts of generosity amongst the military, veteran and patriotic supporter communities on the Tuesday after Thanksgiving.

“They loved the idea, and a partnership was born,” Reed said.

“We’re asking military spouses and veterans to be Giving Tuesday Military Ambassadors. We need those ambassadors to help spread the word and to organize acts of kindness in their areas,” Reed added.

That’s how Stacy Bilodeau, a Coast Guard spouse, got involved.

“I started as an ambassador. The idea of intentional kindness, that’s what got me interested and involved. That’s what I love about this movement.”

In addition to serving as one of the hundreds of Giving Tuesday Military ambassadors last year, Bilodeau assisted by donating her time and talents with social media and graphic design.

“No matter how busy I get, volunteering calms and centers me. It reminds you that you aren’t alone,” Bilodeau said.

She wasn’t alone. It was that like-mindedness and dedication to service that made Bilodeau the perfect fit to join the leadership team when they decided to take Giving Tuesday Military to the next level, by forming a nonprofit.

The four spouses work together despite being stationed in four different states.

“I’m in Kentucky, Maria’s in Texas, Sam’s in New York and Jessica is in Illinois. But with technology, we remain connected and make it work.”

Whether it’s collecting canned foods for your local food pantry, volunteering at an animal shelter, or offering to cut a neighbor’s lawn, you can be a part of Giving Tuesday Military simply by doing something kind.

Then, use the hashtag #GTM2020 to document those acts of kindness.

If you need a little inspiration, the website offers dozens of suggestions to get you started.

“Given the times, we’ve even come up with a list of ways to contribute while practicing social distancing,” Reed said.

But you’re encouraged to get creative.

“There’s no right way to do your part. We all serve in different ways. Our husbands put on the uniform and serve. For me, volunteering is my way of serving. That’s how I give back,” Bilodeau said.

And you can too.

To get involved, or for more information, visit www.givingtuesdaymilitary.com