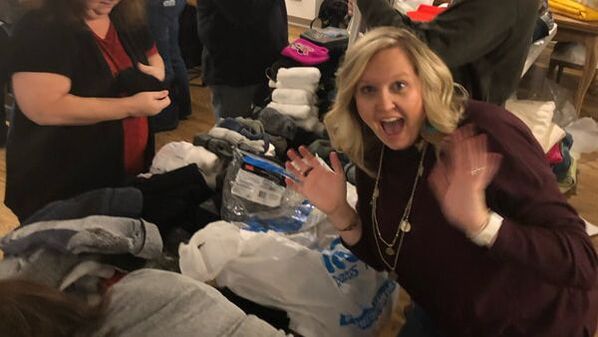 This article has taken me a bit of time to write because the entire experience I am about to share with you has taken me time to process. All good things though, I promise you! That processing brought me recognition of the best kind of humanity. So, let’s get to it.

In August of 2020, my husband got a call from his former Air Force Academy classmate and long-time friend saying that he was headed to Alabama for several months. We were over-the-moon! He is one of our most favorite humans and it didn’t even matter that we hadn’t seen each other in several years. We were ecstatic to be reunited and have the chance to reconnect.

All I could see in my head was meal after meal, all of us gathered around our dining room table which would be full of laughter for the foreseeable future. The bonus surprise was not only a visit from Louis, but with him came another friend of his, Anna, who was here for job training.

Their first Friday night in town, Louis and Anna were right where I planned for them to be, sitting at my dining room table. I could see the pure childlike joy all over my husband’s face as we sat laughing and storytelling and reconnecting late into the early hours of Saturday morning.

Pause for just a second. You see, one thing you have to know about this next part is that the Air Force Academy is a big place, with about one thousand students per class (Freshman – Senior), and at the same time, it is a tiny place.

Anna had attended the Academy for a couple of years, and she knew some of the same people as Louis and Ross.  As we sat around the table, Ross asked if Louis or Anna knew a woman named Sarah. I internally scoffed, thinking there’s no way they would know her.

With Anna saying how much she’d like to see her again, my brain started going a million miles a minute. I had to get them together! After all, this is what I do; I connect people.  I told Louis and Anna they had to come for dinner the next night, and we made the arrangements to have Sarah and her husband come for dinner too.

We pulled it off flawlessly.

I still cannot fully explain to you the energy that occurred in my house when Anna opened my front door, and Sarah saw her for the first time in over a decade. It was a joyful surprise! Sarah thought she was coming to dinner with my family, she had no idea Anna would be there! The tears, the screaming, the hugging (so much hugging), and the pure joy-it was absolutely incredible. We sat at that dining table for hours and ate, laughed, cried, ate, and learned even more about each other.

I witnessed the extraordinary power of connection.

Each of us is hardwired to be connected to other human beings.We were never intended to be alone. We have some people in our lives for a short time, others that stay for a while and others that will come and go.  I genuinely believe that each person has something to offer that adds value to our lives, even if we don’t realize it in that moment.

Ecclesiastes 3:1 says, “There is a time for everything, and a season for every activity under the heavens.”

Authentic relationships are soul enriching. Community is everything. That Saturday night was an inspiring reminder to me that in this current state of our country and world, that dinner time can be extraordinary.

About the author:
Cat Vandament is the 2019 Armed Forces Insurance Scott Air Force Base Spouse of the Year and the 2018 AFI Fairchild Air Force Base Spouse of the Year. She was born and raised in Coppell, Texas where she met her high school best friend and married him after he graduated from the U.S. Air Force Academy and her from Kansas State University. Cat is a mom of two, a pilot’s wife, a public speaker, and an infertility warrior. As an adoptive mom and former teacher, Cat has taken her passion for teaching outside the classroom, to educate and advocate for families that have journeyed through infertility and are navigating the adoption process. She is taking it all one step further and is currently pursuing a Master of Social Work degree with the University of Central Florida.