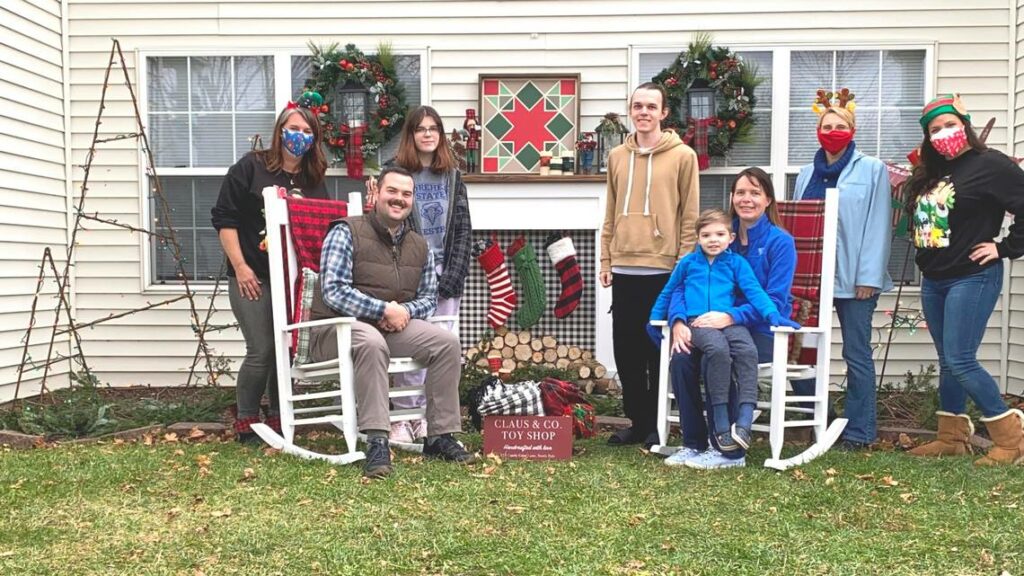 As volunteers in the national non-profit group, Moving with the Military, Jessica Manfre and Alicia Steele of O’Fallon spearheaded an elf team who transformed the home of the Brandon and Robin Bentley family, pictured, on Scott Air Force Base with a front yard makeover that had a country Christmas theme. PROVIDED

Although they don’t wear capes, Jessica Manfre and Alicia Steele of O’Fallon could be considered superheroes among military spouses.

The dynamic duo helped make the holidays brighter for a family who needed some cheer this Christmas season and plan to do much more in the area. As volunteers in the national group, Moving with the Military, they spearheaded an elf team who transformed the home of the Brandon and Robin Bentley family on Scott Air Force Base with a front yard makeover that had a country Christmas theme.

Manfre said she was thrilled to make this joy happen, and that the community had responded so generously.

“I can’t even begin to start expressing my gratitude for this community. As a military family who struggles to ‘plant roots’ everywhere we go (every two-three years), y’all sure made this home. Thank you!” she posted on a community O’Fallon Facebook page. “To the residents that donated lights, money, decorations, a killer control box and their art or time, you have our endless gratitude!”

Manfre and Steele cited help from Lowe’s in Belleville which donated supplies, as their original budget was $350. However, with everything the store offered, they could stretch their dollars much further.

Jennifer Adank, owner of the Courage & Grace studio in O’Fallon, donated three décor pieces, including the quilt design on the mantel.

A neighbor who operates Chick-fil-a in Belleville donated lunch for all the workers.

“It was amazing,” Manfre said. “We couldn’t do this alone. It’s because of the outpouring of support. We are better together.”

Steele designed the plan and came up with the sketch.

“She makes it all happen,” Manfre said.

With a team of volunteers, they worked from about 10 a.m. to 2:45 p.m. on a recent Saturday. The “big reveal” was really special, Manfre said.

She explained the Bentley family touched everyone with their story. Brandon Bentley’s stepson was in the military, and he was inspired by that to pivot himself and join the U.S. Air Force at a later age.

Brandon, his wife and their four children moved from Kentucky to Scott Air Force Base for their first assignment.

“He was quite driven to join. He really felt called to serve his country. His wife was willing to make that sacrifice too. He had to lose 80 pounds,” Manfre said.

The family’s Christmas wish lists were granted by Caliber Home Loans, exclusive sponsor of the program.

The Moving with the Military group, founded by Maria Reed, was featured on the Dec. 18 “The Today Show.” It was part of Hoda & Jenna’s “Joy to the World” series, about people spreading cheer this holiday season.

Photos of the local Bentley family and volunteers were shown first during the segment.

For many military families, the challenge is to turn a house into a home, she said.

The hosts announced Caliber Home Loans was donating $10,000 to Reed’s other nonprofit, Inspire Up Foundation, which provides microgrants. Their mission is “to inspire up a kinder and more giving world by uniting the military and civilian communities through empowerment, education, community building, and a commitment to serve.”

Manfre, one of four co-founders along with Reed and chief financial officer, is enthusiastic about the possibilities through Inspire Up.

They knew they wanted to team up, to take their mission farther. And Steele is another kindred spirit.

Manfre met Steele when Alicia’s family received a makeover in January. The Steele’s oldest child is special needs and their bathroom was turned into an accessible one through the non-profit group.

The two women are a force as a team and are currently ambassadors for a veteran community project involving the Tiny Homes movement for veterans. The Kansas City program is the model, and it’s expanding to come to the St. Louis area, Manfre said.

“You have to be creative in ways to serve. You want to lift people up,” Steele said.

Their backgrounds have led them to be proactive in the communities they move to every three years.

ABOUT STEELE AND MANFRE

Steele, whose husband is in the Air Force, has two sons, 11 and 8. This is the second time they have lived in O’Fallon. She is from Colorado Springs, Colorado.

Because her son is disabled, she doesn’t work outside the home. She established a popular sewing blog years ago, “Sew What Alicia.” She is the author of the paperback, “Eco-Chic Bags: Simple Sewing Projects to Make Tote Bags, Purses, Gift Bags, and More.”

Manfre, a native of Bradenton, Florida, is the mother of a son, 9, and a daughter, 3. She is a writer for multiple publications and has a master’s degree in social work. During the past decade, she has worked in social services and helps veterans and military families receive access to vital mental health resources.

As a military spouse for 12 years, she has learned to get involved in wherever they move.

“The third week here I was pestering (O’Fallon Mayor Herb Roach),” she said. “You learn to get involved. Be a tourist.”

“You have to dive right in or you will have missed opportunities,” Steele said.

They repeatedly noted how grateful they were O’Fallon was so accepting and helpful.

“This is more about the recognition of others than about us,” Manfre said.

“It’s a special place. We really feel welcomed. It doesn’t happen at all places. We are happy being part of this community,” Steele said.

MORE INFORMATION ABOUT THE MAKEOVER

People can see the makeovers on a holiday special season finale: https://www.facebook.com/movingwiththemilitary/videos/391812838558070.

For more information about Inspire Up, visit www.inspireupfoundation.org.