INSPIRED BY LOVE: COMMUNITY RALLIES AROUND MILITARY FAMILY WITH COVID-19 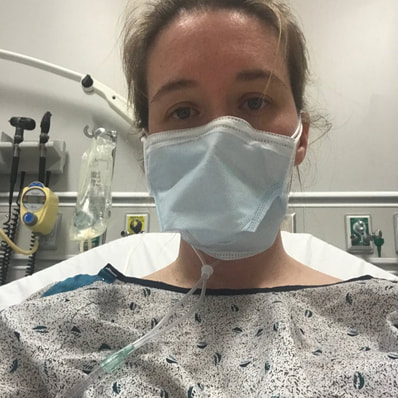 Gomolka shared that she researched the signs and symptoms heavily, watching closely for fever or any shortness of breath. When she started with a cough and headache, she didn’t initially think it could be COVID-19. A few days later, the fever and body aches came. “In that moment, you are kind of stuck between the place of fear and disbelief,” she said. Gomolka said she just knew she had it. She quarantined herself in a guest bedroom, praying she wouldn’t pass it to anyone else in her family.  A call to the public health department gave her the verbal instructions of self quarantine and presumption of COVID-19 based on symptoms, but there was no test available to her due to being considered low risk, and lack of other comorbid conditions.

Gomolka wouldn’t get one, until she ended up in the emergency room.

“Getting up from the bed to walk into the kitchen is not usually challenging. With this, there was an air hunger. It became a conscious effort to breathe in and out all day long. The feeling that I could never get enough air  was making me live right under the threshold of panic,” she shared. Gomolka finally went to the emergency room when breathing became even more difficult and was placed on oxygen for hours. It was there she received her Chest X-ray, CT scan and COVID test, which revealed she did in fact have the virus. Then her husband, who had just returned from a long deployment overseas, started getting sick too.

Their family was quickly and officially served with mandated home quarantine paperwork by their local sheriff’s office, unable to leave their home at all. Contracting this virus and bringing it home to her family — her biggest fear — could have caused despair. Instead, she found the beauty in it.

“It comes down to perspective….. to find the opportunities for beauty. You have to choose joy,” she shared. Gomolka shared that having time slow down for her family was a blessing. Relationships were strengthened and hearts were lifted. What could have been a time of anxiousness was an opportunity to reconnect and spend time in a space of gratefulness.

Gomolka also shared that initially she hesitated in going public with their diagnosis, wondering if people would respond in a negative way. The result was completely opposite of that. “We had an entire community, local and virtual of people who just rallied around us and lifted my family up,” she said.

“We are trying to figure out how we make that kind of difference in someone else’s life and come to their aid in a way that makes impactful change,” she said. One of the ways she’s going to do this, is to immediately go back to work treating patients with emergent conditions and skin cancer. She and her husband also signed up with the New York Blood Center, the American Red Cross, and Upstate University Hospital with the National Plasma Antibody project, hoping they can give their plasma for use in critically ill COVID19 patients. They also plan to try to complete errands and shopping for members of their community who are immunocompromised or elderly.

“We are always going to encounter challenges, but how do you respond to them? Find the good,” she said. She continued on saying that this experience has broadened her definition of what a hero is. “As a military family we tend to think of heroes as someone in a camouflage uniform, but that has changed for me,” she said. Gomolka explained that now, her version of a hero are the people who run towards danger while the rest of us “hunker down”. The grocery store workers, health care professionals, and deliverymen — to name a few.

When asked what she would tell those reading this article, she smiled and shared that although she knows her diagnosis and experience is not the same as others, she wants people to know that together we can make it through anything. She implored people to “pause, and take it all in and find the beauty”.